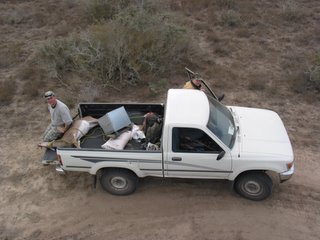 I have to apologize for the lack of posts recently. Been too busy lately with other things. I celebrated old age back on the 7th. Finally registered for school. Gonna be taking some accounting and economics classes and try to get out of this overworked and understaffed bank lobby position within the next year. I finally got down to the lease last weekend for the final weekend of deer season.

A three day weekend with my dad and a couple of pals makes it all worth while. I didn't bag the Muy Grande this year, but I managed to get a doe right at sundown on Sunday. Nothing much to brag about, but the butcher said I could get 60 dozen tamales from just her hind quarters and backstrap. That's quite a haul considering she was only 85-90 pounds.

Dad took his doe to a friend who is excited to be a member of the gun culture. This is an ex-hippie lawyer acquantance who makes jerky in his spare time. He's real excited to make venison jerky. He was even more excited to share his recent gun purchase with us. It was an Argentine Mauser cir. 1889. His first gun, and first foray into the gun collector's world.

Now, I didn't try to jump any javelina with Roscoe this time, but I did make Lee Harvey Oswald look slow in the three shot category. I planned on shooting a doe if no bucks came by at sunset on Sunday. Since my stand was facing the sun, I knew right away when sunset hit. I waited an extra ten minutes to pick the doe I would shoot. One came out from 300 yards to about 125yds. while grazing the road. There were other spikes and does in the other senderos. I also had a half dozen javelina down by a hog trap at 250 yards.

When my opportunity to shoot came, I put a 165gr. Barnes JHPBT through her shoulders for a decent heart shot. She ran about eighty yards into the thick South Texas brush before collapsing. I made that Lee Harvey comment because not ten seconds from that shot, I put the crosshairs on one of the javelina in the other sendero and let fly. He dropped with a solid head shot. I racked the bolt and came back on target to scan for other javelina. Four of them bolted and one remained about six feet away from his buddy. I immediately sent another shot that split his head like a ripe canteloupe.

I only took the javelina out because the conditions were too dry to bring out any hogs, and the coyotes were not moving much during daylight hours. That, and we have the ongoing battle with javelina tearing up our feeders and eating the corn laid out for the deer.

Now, I also hear a couple of you scratching your heads wondering why I didn't shoot the doe in the neck and save the shoulders. Down here in South Texas we have the worry of Mad Deer disease affecting our game. While no reports have surfaced of any deer infestation, we've been told to not shoot the neck area for fear of brain stem leakage that could possibly infect the meat. Whether or not this is a wive's tale, I don't know. I am not about to take chances on clipping the neck and just wounding a deer. Besides, if you saw how long it took my dad to track his doe after a pulled shoulder shot, you would want to put a bullet in the deer's heart, too.

Dad and I are preparing for next year. I will not be using the Tack-Driver, but will switch out to a .300 Weatherby Mag. Dad and I are gonna work together to get some decent handloads for that rifle and his .270. We have a lot of time now to dial in the loads and get some range time. We are also sending the actions for my Sako and his Colt Sauer to MacMillan for new synthetic stocks. I know this may change up my rifle's set up, but I am prepared to work on it to bring it back to a tight zero. The primary concern is that the wood stock on both rifles will lend itself to a problem with warping and throw off our cold-bore shots. There's not much cold to worry about in South Texas, but when you are going for that Muy Grande at distance, every little bit helps.

I am really excited. This is one of those rare father/son projects where I actually get my hands dirty. I know dad is excited, too. I will keep you posted on the Tack Driver rebuild and give any word on the Enfield and a couple of Mauser ideas we've been kicking around.
Mindless Drivel By shooter At 11:45