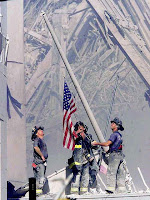 I remember the day when 'the world stopped turning.' Today is the sixth anniversary of the sickest day of my life. Nothing in all my life, until this point, made me angrier. My wife called over from her office and told me to turn on the television. As the screen warmed up, I was greeted with the sight of the second plane slamming into the second tower.
The first words out of my mouth after witnessing that were: "That was no accident. We're being attacked."
Swede didn't believe it. I was in shock. I only read about this kind of stuff happening in Dale Brown novels.
Six years later, our liberties are infringed upon. We listen to pundits and politicians scolding our Commander in Chief and begging him to end the war in Iraq. I have to sit and watch as Cindy Sheehan cries on national television because no one at 1600 Pennsylvania will listen to her nonsense. I have to read about immature college frat-tards taunting our men and women in the United States Naval Academy.
Life has not improved for us in any fashion, but we soldier on. Our President took a stand and said, "NO MORE!" on this day six years ago. He, like so many other Americans, had enough and decided to fight. He unleashed Hell on Al-Queda and the Taliban. He has no plans on stopping until every last one of them is wiped clean off this Earth. That is why there have been no more attacks on American soil. Bin Laden wanted a fight, and we brought it to him.
Keep fighting the good fight, ladies and gentlemen. I salute and support you. Yours is not an easy task to accomplish. I am in this fight, too, along with every other American (whether they like it or not).
May the Good Lord bless and keep our military men and women safe and protected while they strive to bring peace to those who so desparately need it.
Mindless Drivel By shooter At 13:17