The first sunset shot I took with my 35mm SLR. Losing the light and didn't have much time to shoot as I was trespassing and there were men with guns on the other side of this stock tank. With more time, it would have been framed properly and I might have been able to expose the foreground a bit better. 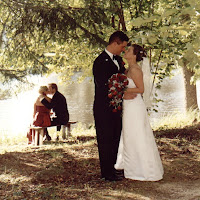 Probably the best photo of the whole wedding album. Check out the Tony Llamas! I was the envy of Swedes everywhere.

A couple of random scenic shots while rowing around the lake at the estate where our reception was held. 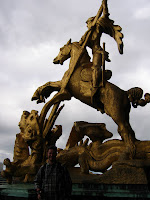 On the roof of the Stadshuset in Stockholm, Sweden. I don't care who you are, that's a cool statue.

A couple of shots of Swede in her native land. I took these the day after we were wed, about three years ago. Those ducks in the first shot had a real jones for the apples in the orchard.

Would you believe this is a handheld shot exposed for about two seconds? Me either. I can't believe it came out the way it did. This was taken in a rice field outside of Garwood, Tx. Dad and I were with some friends getting set up to hunt Teal. I would have had some great shots of the Teal, but man they're fast! 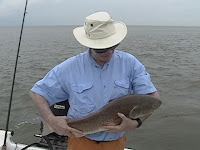 "I'll love him, and pet him, and stroke him, and call him George!" That's dad after catching our umpteenth bull red inside of an hour down in Venice, Louisiana. This was four months before Katrina. That bitch made landfall the same weekend we were supposed to return for another fishing weekend. We haven't been back since.

That's Miranda Lambert shortly after her debut on "Nashville Star." She was playing at the Firehouse Saloon in Houston. The radio station I worked for asked me to shoot the concert for their website.
All these shots were taken with a Canon 35mm SLR except for a couple from a digital camera. I really enjoy photography and need to get out more. With the improvements in digital image processing, I am looking more towards digital cameras. My next camera will probably be a digital P&S (Point and Shoot). I really REALLY like the Canon Sureshot G9 that just came out. I'll keep the film camera body for time lapse photo projects and the odd job out in the boonies. That Canon Rebel really takes a lickin' if you know what I mean. I will also upgrade to a Canon Rebel Digital SLR body as soon as funds are available, too. Meanwhile, I am looking around for a totally waterproof digital camera I can take sailing and not worry about getting soaked or dunked in the Gulf of Mexico. I know it's out there, but can't seem to place the brand. Any help? Anyone? Bueller? Oleg? Anyone?
Mindless Drivel By shooter At 21:13