Finally have pictures from a 3 gun match to show. Proof that I actually shoot. These were taken last weekend at the Comp-Tac Charity 3 Gun Match at Impact Zone in Waller, Tx. All the money raised went directly to supplying our troops with needed equipment that they didn't, or couldn't, get in the field.

I did okay. Finished in the middle of the pack. Actually won a prize from the prize table, a Kershaw knife designed by Ken Onion. Probably the coolest thing I got was in my goodie bag, an armadillo bottle opener from LaRue Tactical.

The stages were designed well and were fun to shoot. My only problem was getting my G3 clone to feed properly. 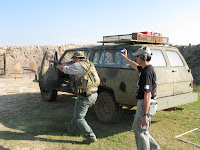 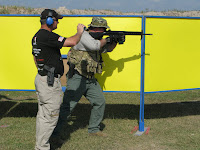 Here's the start of a rifle only stage. This was touted as a looter shooter scenario from Hurrican Ike. I think this was the best stage I shot all told. Could have been faster if I got the damn mag seated right when I chambered the first round. Oh well, it happens.

I was surprised on this stage that I scored A zone hits on the run. Well, more like a brisk walk. Even after not shooting since Windage was born, I did damn good to get hits like I did. The XD worked like a champ after a 50 round warm up. It hadn't been fired since I replaced the trigger return spring. People were amazed that it went 40K rounds before failing.

Here's the last stage. Shotgun only on steel poppers. Cleared it in about 45 seconds flat. Did okay using a Benelli I never fired before.

I was miffed that we didn't have a long range rifle stage. A couple of others expressed opinions of the same. I would have liked to have a 100yd or longer stage to really challenge me.

It was a good day. We raised about $6,000.00 for the troops, shot some holes in paper, had some good BarBQ and got to visit with friends. I had a blast and look forward to the next one.
Mindless Drivel By shooter At 18:47