Got to work on a new 'hobby' the other day. Stumbled across Stormdrane's Blog some time ago and thought to myself, "WOW! That's pretty darn cool! How do I get to make stuff like that?!"

Well, I just got to doing it. He's got a couple of good instructional pieces on his website, and you can see several different pieces he's designed. After some more practice with Sinnet knots and Lanyard knots, I will tackle some more complex stuff like Carrick Bend bracelets and Monkey's Fist knots.

Here's some of what I created over the weekend. All-in-all, it is not that time consuming if you're just out to make a few small pieces for yourself. Very relaxing in front of the t.v., or listening to iTunes. After a few false starts, the bracelets took about an hour each to complete. The hatbands took another hour each. The lanyard knot was a beeotch kitteh to complete. Not for being entirely difficult, but just the way I process instruction. I went with a couple of different links from Google and managed to get it right. Took about four or five tries to get it the way I wanted it. I may start all over with this one. Not too keen on the length. 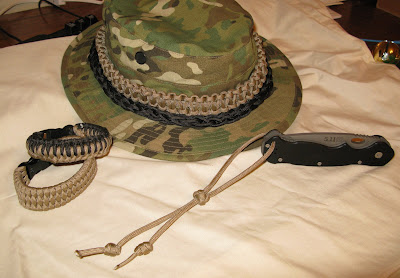 Anyway, I'm working on a snake knot hatband in blaze orange for another boonie hat. I guess thirty feet of paracord is enough to wrap it around. That is my idea. Saw the knot and thought it might work as a band. Maybe, maybe knot.

I found some of the 550 cord lying in my 3-gun box and got started. A trip to the surplus store scored some more 300' spools in ACU gray, Navy blue, blaze orange, and basic black. Found a jig at the craft store to make the braided band. Need a smaller one if I'm gonna work with smaller diameter cordage.

Most of the information on knot tying I found at Stormdrane's. He has a very comprehensive list of knot tying books there, as well as some great instructions and how-to posts.
Mindless Drivel By shooter At 19:32