Spent today at Impact Zone in Waller. A nice way to spend a post-birthday weekend. This was the monthly 3 gun match, and it was fun. Cold, but fun. A front pushed through this AM and really set the wind a' howling. I'm more windburned than anything else. Still, any day where you can shoot (and there are probably fewer of those days remaining) is a great day. Here are some photos... 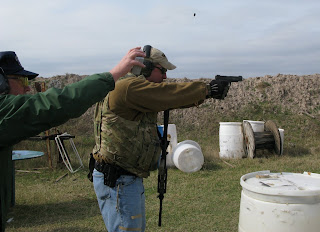 This was the final stage. I just blew through the rifle portion. Hey, I was there to have fun. I wasn't worried about rank at this point. Also, my ears froze up about an hour prior. I was ready for Repka's restuarant and a nice chicken fried steak. This stage started with a six shot pistol portion. One shot on each steel pop-up would bring up the cardboard targets. Two on each to neutralize. I cleaned the first target before the second was fully up. I have to brag when I say I ROCKED that part. 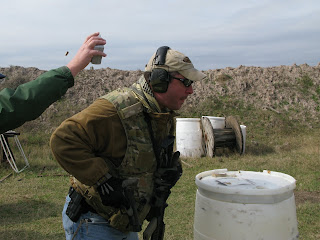 Talk about your fast transition. Notice the brass flying past the Range Officer's hand. That was fast. And you'll also notice that I have full retention of both rifle and pistol. Check out that finger in register! Instructor Greg would be very proud. No photoshopping that finger. No sir! 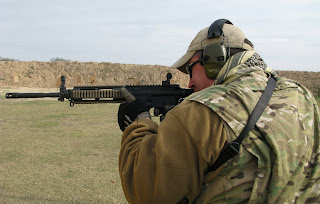 Squared off, lean in, elbows in...yup, I'm on target. Notice the flip up BUIS sights? I was the only one today running iron. A) I'm a bit cheap to buy a decent optic, and B) I don't have the money to spend on one anyway! Still, I think shooting on iron sights only lends a bit of a challenge to the match. 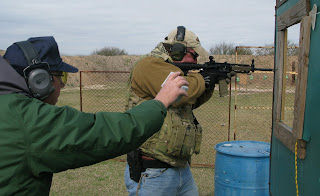 Tight on the cover. Didn't have to move far to hit what I was aiming at. The wind was so bad that they had to disable the swinger/no-shoot target on this stage. I was kinda looking forward to that. Probably why I went wild and lit up the stage, not caring about time or score. 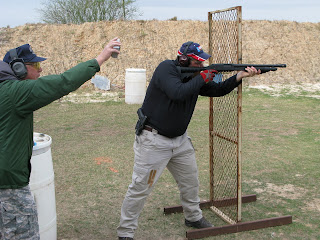 My buddy, Swoop, getting after the shotgun stage. He took my two extra slugs to complete the stage. I would have neutralized both slug targets if he didn't do that. Hey, I don't mind sharing. I did get two mags of Lake City .223 out of the deal. *neener* 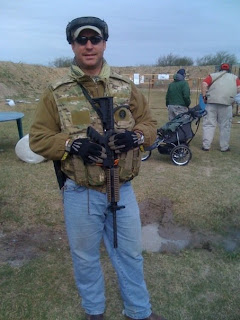 I'm usually more tac'd up than this. My one and only day to really geek out and get my Tommy Tacticool on! (You know, 5.11 pants, Under Armour shirt, tactical web gear, holsters, tac boots, etc.) I figured that since it was my birthday on Wednesday, I'd go and do some "Cowboy Tactical." I had the cowboy hat and everything. The wind was blowing too hard for the hat, and I couldn't find my squishy earplugs I prefer wearing outdoors. I had the jeans and the boots on, so that will be close enough. Maybe next time.

Okay, if you're somewhat curious about equipment (and some of you may just not give a rat's pink arse!), here it is:

Mindless Drivel By shooter At 19:44