The Only Easy Day Was Yesterday!

Remember how I mentioned the class leader is responsible for formation and head count before Instructor Walston arrives? Well, guess who didn't set aside his ego long enough to think straight and get the damn job done? Yup, yours truly. 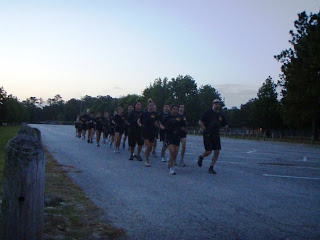 We were stretching in the parking lot just a couple feet from our usual formation spot. Walston comes blazing up in his truck and we rush to our places. We barely beat him to the punch, but were in the wrong spot. That got us some pushups. I should have known it was going to get worse when the instructor I refer to as 'The Hawk' showed up. This was gonna hurt.

After DAY 2, I could not lift my arms above my head. Heck, getting them up to shoulder level was a massive chore. Never in my time with SEAL PT did I ever think I would do so much.

We ran to the field and proceeded to start what I refer to as the "Rugby Field Death March, Pt. 2." Start in the same position, right face, start crawling.

I got about 75 yards when the fun really began.

I didn't have the count, and got reamed for it. Both Walston and the Hawk were on me from the get. The lesson was very clear. I was fired as class leader for lack of attention to detail. It is a mistake I will never in my life repeat. When someone gives me an order, or job to carry out, I will make sure it is completed. I will ensure that the job is done to Instructor Walston's standards. Not mine.

By the time I crawled to the midfield point, they were through yelling at me. I was uncerimoniously fired by this time. I was pissed off, too. I let the team down for the second straight day. The Hawk didn't let me forget my lesson that easy. He had me drop down and face to the north. By now, I'm on my belly facing back the way I came. "Now roll around the field. And you better not be last today!" he said.

I started doing reverse somersaults down the length of the field. This field has not seen rain in some time. Houston, Tx. was in a drought situation at the time (and still is). The ground was rock hard, torn up and rutted from everyone using the soccer pitch on a daily basis, and filled with detritus that makes me glad my tetanaus was up to date. I could feel the rocks and hard ground with every rotation. I could also feel my equilibrium slipping away. I sucked it up, manned up, and stuffed the nausea back down to complete my task. I have a lot of respect for Instr. Hawk. A lot. I know a bit of that man's personal background, and admire his leadership skills. I wanted to redeem myself in his eyes. I knew I failed him along with my team, and it hurt. I used that energy to get moving.

Instr. Walston walked off to torture the Lifers and Body Camp crew for a while. This left Instr. Hawk to circle above us and strike when necessary. He didn't say a word when I heard Walston from over 200 yards away yell that we had a couple of quitters. Our most timid female in the group just up and walked off. One of the others went with her. At least he paid attention and made sure she was not alone. No one goes anywhere (head, car, surf zone) without a 'swim-buddy.' The other guy did his job and came back when it was clear that Ms. "Mouse" was through. She later stated in an email that Walston intimidated the poo out of her. She wouldn't hear any of our pleas to come back. Done. Fine.

Hawk paid us a treat for finishing the bear crawl. Eight-count body builders. This is his special way of making you pay for your errors. And when one person screws up, everyone pays the price. Twenty 8-counts later and we were thrashed. But the hits just keep on coming. We ran back to our workout mats to grab water. Three seconds after that, we were grouped in three-person teams to fireman carry across the parking lot. Easier said than done.

I tuned out at this point. I was only listening for my name or whatever order the instructors were giving during this evolution. It was better for my group because I found the humor in the situation. I started quietly singing a Navy run cadence to take my mind off the pain in my arms and shoulders. My crew and another next to us joined in the whispered cadence and were chuckling. I'm sure Hawk heard, but he didn't let on. Let us have our moment of defiance, he'll see to us later. 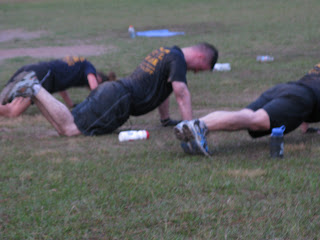 We reached the end of the parking lot. Instr. C was there to give our shoulders further torture. As Walston said before he left, they were to "TORTURE THE PISS OUTTA THEM!" We dropped to the leaning rest. I was still not out of the woods.

I should note that this is where my recollection of events gets reeaaaalll hazy.

Me (in the leaning rest, breathing heavily): "Oh-six-fifty-five, INSTRUCTOR!!!"

Hawk: "Wrong answer, try again." He never yells at you. The man always uses a level tone of voice.

Me (staring intently at my watch face willing the numbers to read what I say): "Oh-six-fifty-five, INSTRUCTOR!!!"

Hawk: "Wrong again. Will someone please explain the world to Mr. Shooter?"

Class Gimp (I'll get to him later): "Time is Oh-FIVE-Fifty-Five, Instructor!"

Fifteen minutes later, my vision returns to see Instructor Hawk holding two fingers in my face asking: "How many fingers am I holding up, Dummy?!"

My team later recounted to me that as I recovered with the group to get wet n' sandy, I started to stumble, fall, and babble incoherently. Hawk got me on the ground, head between my legs. Instr. C ran the group through surf zone and got them out of the way. By my watch fifteen minutes had passed. I don't remember any questions or whatever I said in response. Hawk stated that I answered everything correctly, and never lost consciousness. He had me douse with the hose and rest under a small tree for about ten more minutes. After that, he ordered me to either a) move at a pace faster than a crawl, or slower than a jog, or b) slowly walk back to the PT area. Those were my only choices, so I took 'em. I opted for B. It took me a long time to walk back. I stopped to dry heave once, and one more time to rest against a bollard (short wooden pole). When I rejoined the group, every eye was on me. I was ordered to sit down and drink water. Every time Hawk checked on me, I asked to return to the group. He put me through a couple of balance tests to judge my recovery and I failed each one. "Sit down before you fall down," he instructed. 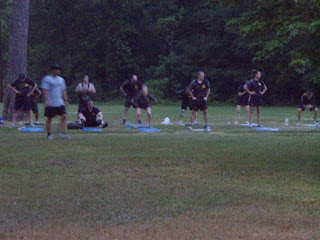 (yeah, that's me on my butt after 'bonking'. the grey shirt is Instr. Chang, our shoulder expert)

As he later recounted to me in an email, Hawk said I'm lucky this wasn't a real world exercise. As a SEAL, he's seen this before and advised I'd have been given oral glucose, smelling salts, and a rectal thermometer. Yeah, I don't think I want that sort of treatment. Per him, this is what happens when you are at a low fitness level and high motivation level. It didn't dawn on me to eat a proper breakfast before workout. My usual during Body Camp was a large glass of water and vitamins. From now on, I was ordered to eat a banana and a granola bar (something with oats in it for the carbs). It helped.

I'm not proud of that day at all. I pushed too hard and went 'bonk.' Didn't really scare me, or panic me at all. I didn't know what happened until afterwards. It was a big wake-up for me, though. This is what happens when I don't focus and go too hard. This was a lesson that will help me in the police academy. I have Instructor Hawk to thank.

The team was glad I made it through. They were worried for the most part, and so was I.

I should have called in sick to work for the day, but that would have been admitting failure. I didn't get any work done because my stomach was so topsy-turvy and my brain was mush. I came back for DAY 4 stronger and ready for whatever came down the pipe. Bring it, Walston. I'm ready.

HOOYAH!
Mindless Drivel By shooter At 18:52