Good to be home, but sucks dog's bollocks to leave.

I just returned from the land of long tall Swedish women in bikinis. Let me tell ya, it is no myth. They really do look like that. And I got my fair peek at those lovely ladies. Plenty to look at while down at the water front and on the boat in the Archipelago.

Time to snap from my reverie. The Swede and I had a lovely time in Sweden visiting family and friends. We were also witness to Brother Swede's nuptials to Finnish Princess. They are now stateside on their two week honeymoon. First thinkg they did was call us from the beach at 2 a.m. after they got off the plane and to the hotel. Crazy kids are having a heck of a time in Florida. 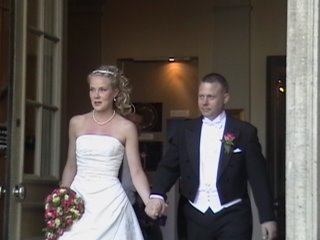 I have been busy uploading photos from the trip to the computer. Kinda hard to plug into Blogger while on dial up. Need to get that fixed when I get a new house. The wedding was wonderful. They exchanged vows inside the Gustav Kyrkan (Gustav Church) in downtwon Stockholm. We celebrated with a wonderful reception at the Haringe Slott outside of Stockholm. The party went well into the night and plenty of Norrlund's Gold Export and Mariestads Starkol was imbibed. 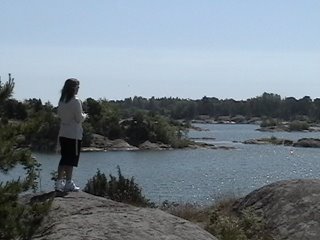 Swede and I spent plenty of time around the wedding just being two kids on vacation. This was the first vacation in a long time where neither of us worried about work. For those of you who suffer through bad times in your job, I am truly sorry. Not being able to relax on a vacation is a very bad thing. The vacation is ruined by the stress and aggravation of not knowing if you are going to return to a job or not. I had that happen on my last three day weekend. Where's the joy in that?!

This photo above was shot while we had lunch on a private island in the Archipelago near Norkopping (pronounced Nor-shopping). I don't know how to put the little dots over the first 'o', so you will have to bear with me. Nothing more than a bunch of rocks and trees thrown together. God must have had fun designing this place. I shot lots of video this time around. Really gave the MiniDV camera a workout. Once I get some software to process the footage I shot, I will have a great DVD put together for my BIL. I managed to get the whole wedding ceremony on tape with minimal shake. Handholding the camera was a bitch. I have got to get a good carbon fiber tripod I can lug around.

I was also immersed into the world of World Cup Soccer. It was unbelievalbe to watch and participate in. The entire country practiaclly shut down to watch their national heroes play against Paraguay, England, and Gemrany. I had a laugh during the England match. We were in Stockholm hanging out with Brother Swede and Princess before they took off for Florida. He took us to a brit style pub where a bunch of hooligans from the local football club hang out. The "Poor White Trash" of Solna are the hooligan fans of the A.I.K. Football Club. Rough looking bunch who'd show the bangers in the States how it is really done. According to Brother Swede, these guys are hard core pipe hitting Mutha F*$kers. True old school fighters. None of this drive by with a gat B.S.

Anyway, we got the last table reserved at their local pub for the game. As the Swedish National Anthem is being played, in walks a Brit wearing an Arsenal jersey and singing "God Save the Queen." He was their with friends, but apparently they thought this was a 'real British bar.' Boy were they wrong. Shortly after England scored their first goal, he almost had his kidneys fed to him through his belly button. Actually, I think the "Poor White Trash" guys felt sorry for the bloke. We were certain he was going to have a bad run in with some defenseless pavement, but the PWT actually enjoyed his company. Good to see such sportsmanship among two very bitter rivals (England has not won a match against Sweden in over thirty years!). The game ended in a tie (2-2), and the earth resumed spinning. The big gust of wind I felt was the collective exhale of the population of Stockholm catching their breath.

I'd share more right now, but I am feeling some effects of jetlag. It never really bothers me going back until about a day or two later. We landed in Houston around 4:30 p.m. from Newark and I felt fit as a fiddle...except for the blown knee running to the gate from Customs & Immigration. Thank Goodness those guys were on the ball and courteous. They could have rained scalding pee on me and Swede, but they were gracious enough to not hassle us with stupid buracratic B.S. That was the only decent part of the return trip. More about that manana.

Mindless Drivel By shooter At 18:46