I quote Ralphie Wiggums: "I bent my Wookie!"

That's right. The picture you see here is the result of approximately 40,000 rounds over the course of nearly three years of weekly shooting. A cracked locking block. And a doozy, too. 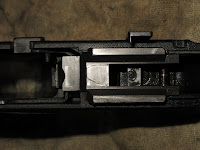 Realized I was S.O.L. two weeks ago when Roscoe failed to cycle while I was trying to run through a steel plate stage before the monthly carbine match. After about the third sequence of *click* BOOM "What the F&*%?!" I realized something was amiss. Stripped it down and came across a bad juju scene.

Had a good chat with the nice people in Illinois about my pistol. Trish, in repair, set me up with a shipping label and told me to send it on up to them. Gonna drop it in the mail later this week to see if they can repair my baby and get me back to shooting form. Which reminds me, I really need to get my Oakleys in for repair, too.

You know, I always wondered when my XD would bend. 40,000 rounds is a bit of a haul before a complete breakdown. I've heard of other XDs that fail completely with busted springs and other such nonsense. Heck, I treated this thing like a Glock and it came out running like a champ. Pretty proud of it, if you ask me. Guess we have to wait and see how the reincarnation of Roscoe works. Gonna be about a month before I get it back, so just left to the handy dandy Mr. Blasty for day-to-day work. Haven't put that 1911 through its paces in a long while.

Shotgun night tomorrow for Tac Tuesday. Think I'm gonna sit this one out. Gun show this weekend at Geo. R. Brown. A friend of mine is going to introduce me to one of the bigger vendors there for a chance to earn some weekend cash. If all goes well, I might be working the show. If not, I can always hang out at my buddy "Swoop's" table.

Call this guy "Swoop" because he is a master parachute rigger and skydiver. Now, why someone throws themself out of a perfectly good airplane, I'll never figure out, but he actually enjoys it. You know, in another life, before a preggo Swede, I might have taken him and his buddies up on a chance to chunk my butt out the arse end of an Otter, but responsibilities have taken ahold. Grounded I am. No matter, we still go to the drop zone out in Waller after a day of shooting and watch other plummet towards earth. Actually stood less than five feet from a guy performing a swoop manuever over a pool the last time out. Man! I wish I had my camera for that one. He was so close I could have wrapped my arm around him as he sped past. That was pretty awesome.

Next time, I'll remember the camera!
Mindless Drivel By shooter At 19:47